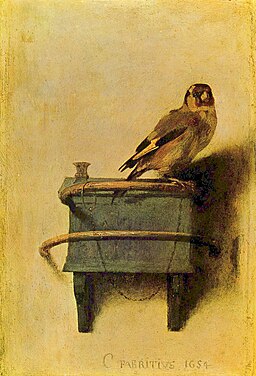 Those who appreciate art cherish the moments when a work touches us. Donna Tartt’s The Goldfinch captures this power of creativity on its beholder: You’re listening to music and are carried away by it; you’re mesmerized by a dance; you’re reading a work of fiction, watching a play, looking at a painting, hearing jazz or a symphony and you become so deeply held, so rapt, that a personal connection is made. In this moment of union with the work, it as though it were there for you alone. Yet, simultaneously, almost paradoxically, you feel connected with all of art, with all of history and all the future. The Goldfinch captures the life-changing intensity of art in a way that resonates with anyone who has had this experience of creative awakening, of simultaneous intimacy and universality. Tartt’s novel illuminates the wonder of human creative experience while reminding us of the struggle for survival of all that is human: love, art, life itself. This is what draws us so deeply into this long novel.

Yet the journey is not without its pitfalls: For all its illumination of the wondrous power of art and of the struggles for survival of life and culture, Tartt’s The Goldfinch may also be seen as overreaching, as trying to be grander than need be. More importantly, some of the conclusions it appears to draw about life are troubling.

The Goldfinch tells a simple story: Theo, its first-person narrator, has come into the possession, by the happenstance of an explosion at the New York’s Metropolitan Museum of a precious work of art, Carel Fabritius’ small oil painting of yellow bird tied to a twig by a chain. Fabritius’ painting has survived a catastrophe centuries ago. Now, following another calamity, its fate and Theo’s are inescapably linked.

Because the Tartt grounds us in lucid, detailed realism, we experience this directly, vividly, viscerally. Nowhere is this more evident than in the unbearably realistic depiction of the catastrophic explosion that begins Theo’s tale. A boy on the verge of adolescence, Theo’s mother dies the explosion and he walks out of the debris with the Fabritius painting. Fearing reprisal for having it, Theo holds onto it through a series of increasingly miserable and dangerous circumstances: drug-addiction, fraudulent antique dealing, lethal violence. Theo begins to realize that the longer he holds onto the painting, the more power it has over him. Dragging himself through a downward miserable spiral of addiction and withdrawal to addiction again, Theo’s sense of doom increases inexorably. The moments when Theo feels that he is “already dead” are palpable.

The frailty of the work of art is mirrored by the frailty of life and love: his mother dead in an instant; his father, barely caring about his son at all, doomed to self-destruction by his addictions (gambling and drugs); his friends either ineffectual or untrustworthy. His hope for love rests on the thinnest of connections. Will Theo’s love for the girl, Pippa, whom he met moments before the catastrophe, save him? We do not know, for as Dostoevsky (an author of whom we hear a good deal in The Goldfinch) says as Raskolnikov finds love at the end of the Crime and Punishment: “This may well form the theme of a new tale; the one we wished to offer the reader is ended.” What we know is that for Theo has at last taken a hopeful step, at last chosen to reach for love. We do not know where that step will lead him.

Given the important themes of the work, the allusions to Dostoyevsky, the protagonists’ epiphanies and philosophizing, and the sheer length of the work, it appears to be reaching for epic stature. In awarding the 2014 Pulitzer Prize for literature to Tartt’s, the work is described as “a beautifully written coming-of-age novel with exquisitely drawn characters that follows a grieving boy’s entanglement with a small famous painting that has eluded destruction, a book that stimulates the mind and touches the heart.” The New York Times’ review praised the work as “Dickensian.” But there are risks in reaching so far. When Tartt’s novel is compared to Dickens, some readers may be reminded of the story that Dickens was “paid by the word.” (This is somewhat apocryphal; he was actually paid by the installment.) When Tartt’s use of foreshadowing tells us that something momentous lies around the bend, the long series of intervening events and details can feel painfully drawn out.

Theo’s vivid recollections of scenes with his mother, for example, are a repeated motif. It makes emotional sense that an early adolescent traumatized by his mother’s sudden death would romanticize her, see her only as a love lost. Theo’s trauma appears to have wiped all negative images from his mind. He does not seem to recall times when she was indifferent, self-absorbed, or irrationally angry with him. Since we wear Theo’s blinders, we are left with a two-dimensional view of Theo’s mother and of his relationship with her. Theo’s yearning back to a life that he can never live again with a mother he will never see again takes him back and forth along the same narrow track.

The arcs of sequences of events — memories of his mother’s goodness, of his father’s meanness and self-destruction, of encounters with dangerous people, of drug intoxication and withdrawal — may feel repetitive. Though the repetition itself has its own value, sometimes one may feel hit on the head too many times with the same blunt instrument, sent through the same wash-rinse-dry cycle too many times.

Ultimately, this is a matter of taste. Theo’s detailed descriptive passages and repeated travails may bog down one reader while enthralling another. Few complain when speaking of Moby Dick, for example, about the scores of pages Melville devotes to categorizing whales. Readers who are captivated by the detailed descriptions, the cinematically dramatic encounters with his friend Boris, and the frozen-in-time reverence Theo holds for his lost mother do not experience these passages as tiresome or unnecessary.

One thought on “Yellow Bird – The Goldfinch by Donna Tartt”

Essays on creativity, community, social change, and the search for meaning